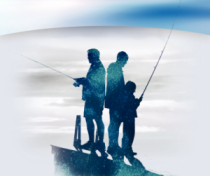 True story here: a growing church of 1800 (from 300 only three years earlier) decided to start a Men's Ministry with a Bible Study for men. Lots of prayer and encouragement from the pulpit, plus a splashy PowerPoint show, encouraged men to come. The night of the study the staff set up 200 chairs in anticipation. Three men showed up.

What went wrong? Following are five staff assumptions about their advertising approach to this even and why they didn't work.

#1 The staff assumed men would do what the Power Point® told them to do.

The colorful, eye-catching PowerPoint® slide show ended with a call to "sign up in the church lobby." What they wanted to be a call to action was in reality the kiss of death to any event sign-up.

After church is over, does any man to say to his wife (please forgive any implied sexism in this illustration), “Honey, would you please wait for me in the car while I find out where to go sign up for the men’s Bible study?”  It doesn’t happen. I know my own husband’s most pressing thought after church is–where are we going for lunch? Following the thought of food is football, basketball, or hockey, depending on the time of year. Most men I know, godly guys that they are, are similar in their after-church priorities. Trying to find a table in the church lobby to find out information about something that you may or may not be interested in simply is not a priority, even if by chance a man remembers he was told to do that.

Any time you require people to take a second step (call the church office for more information, sign up in the lobby, etc.) to find out essential details that they need to show up for any event, you will drastically cut down attendance.

#2 The staff assumed that men would remember the connecting details from the PowerPoint® announcement presented every Sunday.

Most men don’t. PowerPoint® is great for song lyrics, to set a specific mood for worship, or for graphics to reinforce a story or theme, but few men (women or teenagers) sit in worship, pencil in hand, ready to take notes off of a PowerPoint® presentation. A bulletin insert, ready to post on the refrigerator with all the details on it, would have been much more useful. Wives and girlfriends post it and remind the significant men in their lives about it. Yes, it might seem retro, old-fashioned, a bother to produce, but it works.

#3 The staff assumed that having the pastor encourage the men to come to the event meant something to the men and would make them want to come.

It usually doesn’t. Pastoral leadership doesn’t have the influence it once did. We live in an irreverent age, an age that doesn’t admire authority. A personal invitation can be powerful, but pleas from the pulpit to attend events that aren’t particularly appealing to uninvolved church members, men or women, are seldom heard, let alone acted upon.

#4 The staff assumed that men would want to come to a Bible study.

Most men don’t. There was nothing in any of the advertising that told potential attendees what they would study, what it would do for them, or if it would change their lives or benefit them in any way. Just mentioning a Bible study simply makes lots of guys feel guilty, not hungry for the Word. For most people, even church attendees who are new to the faith, a Bible study is not a felt need. We may think it ought to be, should be, needs to be, and that’s all true. But for most people, it isn’t.

#5 The staff just assumed that a Bible study meant as much to the new Christians and unbelievers who attended the church as it did to the church staff.

It doesn’t.  Remember: The number one question people ask when they get an advertisement for anything from the church or elsewhere is, “What’s in it for me?” If that question isn’t answered quickly, clearly, and in a way that meets a need, people don’t show up.

What the men’s ministry planners should have done

To get men to come to a kick-off for a ministry or Bible study for men, the church leaders needed to pray, but they also needed some marketing savvy and some common sense. They should have:

#1 Provided food and advertised how great it would be.

A good, hearty, regional favorite—ribs, tri-tip, all the pancakes and sausage you can eat, whatever appeals to the men in your area, provide it (and lots of it) at the kickoff event. Jesus often fed people both in large groups and at fish cookouts on the beach for his disciples. Copy his caring for the whole person.

#2 Made it an event that would appeal to men for more than primarily spiritual ones.

Starting a Men's Ministry or Bible study series with a locally popular speaker (a sports figure, perhaps) who is also a believer in Jesus that the men would want to come and hear would have also been a good idea. Guys hear the pastor every week. A successful business man or athlete or coach can help men see that the values of the Bible transcend Sunday morning.

#3 Be honest about the spiritual value.

Most men want to have a lasting and significant impact on their families and those close to them. Becoming a man of wisdom, insight, and strength that a study of the Bible and becoming a mature disciple of Jesus can provide, is a great benefit. In the outreach materials, these benefits should be clearly stated. Respect your men enough to be straight with them. We have the Words of eternal life; the message of true and significant power. We should not be shy in sharing it.

Remember, “The message is the message.” It doesn’t matter if you spend a pile of money for four-color printing or a scrolling website header, if you don’t give the time something starts or the location for the event. Don't forget child care options for single dads. Complete basic information is the foundation of all successful ministry marketing.

#5 Send out a series of postcards and/or email or text blasts to the men of the church, as well as providing information in the newsletter, bulletin, web or whatever other channels your church uses announcements.

Don't discount postcards. The current USPS television ads with the tagline "the refrigerator has never been hacked" are a great reminder of their continuing usefulness. Postcards, if done correctly, tend to get carried directly from the mailbox to the refrigerator. Once posted, an announcement on the refrigerator is a far more likely to illicit a response than an announcement in a discarded church bulletin. Email notices can be added to electronic calendars. All the details mean nothing if they can’t be accessed when needed.

Growing and advertising a men’s ministry isn’t easy, but it also isn’t impossible.

There are many challenges and a lot of hard work that needs to be done to advertise, promote, and grow a Men’s Ministry at Father’s Day or any time of the year, but it is worth it.

A strong group of men who are growing in Jesus and discipleship is a joy and strength to churches and families not only at Father’s Day, but throughout the year.