Today is the 75th anniversary of D-Day and while we commemorate and honor the sacrifices of those who stormed the beaches of Normandy I think it is appropriate to remind everyone who is involved in Church Communications that you are daily involved in storming the strongholds of Satan to win people to Jesus.

First here is the podcast and below it the text it is based on:

Though he was talking about the church in general, whenever I read this quote I think about the work we do as church communicators—whatever part you do: preacher, church secretary, designer, anyone sharing the messages of the gospel:

Enemy-occupied territory—that is what this world is. Christianity is the story of how the rightful king has landed, you might say landed in disguise, and is calling us all to take part in a great campaign of sabotage. When you go to church you are really listening to the secret wireless from our friends: that is why the enemy is so anxious to prevent us from going.

For how this fits into the idea of D-Day, let me continue with a challenge/devotion I wrote for Church Communicators:

A challenge, devotion, and reminder of what our work is truly about

For our struggle is not against flesh and blood, but against the rulers, against the authorities, against the powers of this dark world and against the spiritual forces of evil in the heavenly realms. Therefore put on the full armor of God, so that when the day of evil comes, you may be able to stand your ground, and after you have done everything, to stand. (Eph. 6:12-13) 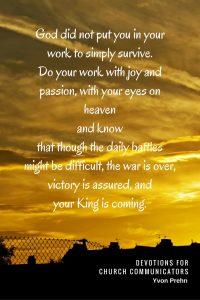 Working for the Lord in church communications is hard.

The bottom-line reality is that we are in a war. And in any war, one of the first things the enemy tries to knock out the communications equipment of their opponent. You aren't just "doing the bulletin" or the latest social media or some other isolated project. You are the communication center for spiritual warfare for your church. When you got into communications work for your church or ministry you entered one of the most intense areas of spiritual warfare raging today. Satan wants to knock you out.

Troubles with hardware, software, and co-workers are to be expected. Especially people problems should be no surprise because Satan is "the accuser of our brothers" (Rev. 12:10) and one of the easiest ways to cripple you in the battle is to get you fighting with your fellow soldiers. Don't let him win; don't take on his job.

Remember also that you are in a war that has already been won. When Jesus died on the cross, he said, "It is finished!" When he rose from the grave, he conquered sin and death.

Because of Jesus' finished work, our battle resembles the fighting of the resistance fighters in France at the end of  WW2. The allies landed on D-Day and basically, the war was over, but until Paris was liberated, the war wasn't over for the French Resistance. The resistance army still had to fight. If you study the history of the resistance, you find that one of their primary weapons was communications. "Freedom is coming—the war is over—hold on until the victors arrive!" That was their message and ours is the same.

We may be involved in spiritual warfare, but we don't have to fight alone. We can expect help for the battle. Our help never comes ultimately from new equipment, or a more peaceful work situation, or more considerate workers. Our help comes from our Lord and from doing our work according to his Word.

Learn to encourage yourself from the Word of God. If you don't train yourself to look at the battle you are in as spiritual warfare, if you don't draw your strength from Jesus, your job will be much more difficult than it should be.

God did not put you in your work to simply survive. Do your work with joy and passion, with your eyes on heaven and know that through the daily battles might be difficult, the war is over, victory is assured, and your King is coming.

*****
From: Devotions for Church Communicators by Yvon Prehn

My adopted grandfather was in one of the boats, you see in the images of D-Day. He made it on to the beach, through the first horrific day, and the next day when it seemed safe and they were walking through a quiet French village he stepped on a land mine. His broken and bloody body was thrown on a pile of corpses, but a nurse walked by and noticed he was sweating on his upper lip. They pulled his body from the heap and many years later, he shared his story with me.

Of course, there is much to his story I don't have room for here, but I want to share one part in closing.

He said that the troops knew they were going to be doing something very important, though most had no idea of where or what. But, almost as an aside, he added that as they boarded the boats in the pre-dawn hours, they knew most of them would never return. Spontaneously, he told me, all the men around him emptied their pockets of cash, change, anything of value and gave it to the street urchins who lived on the docks.

Of the many things he shared with me, I remember that the most.

And I think today it is a fitting challenge to all of us. Most likely we will never face anything with the raw, physical challenges of D-Day. But we have battles to fight. And in them we have the choice of fighting in a way that is petulant and pouty in our hearts though we might smile on the outside, but inside we are self-protective and thinking about how we aren't appreciated or stewing on the faults of others who never meet our deadlines or appreciate our brilliant designs.

Or we can pour ourselves out in loving sacrifice and kindness to those we serve in the church who most likely will never meet our deadlines or appreciate our brilliant designs, but who are also fighting in the best ways they can for the kingdom of God.

A closing prayer for us all

Lord, as we remember the sacrifices of those who emptied their pockets and who gave their lives to defend earthly freedom, may we who fight for the eternal souls of humanity daily remember we are in a war. Help us to call on you for strength when we are tired, for wisdom when we've run out of ideas, for kindness and grace when we want to be demanding and grumpy.

Help us to remember that you are with us in our battles and may our heart's desire be to reflect You in all we do as we pour out our creativity and care into our communications. May we fight well until we see you face to face and hear your words, "Well done" in Jesus name, Amen. 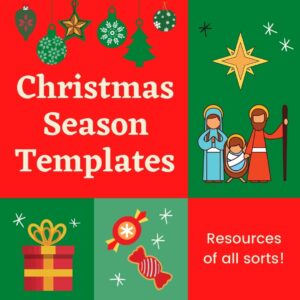